I built this car with the goal of miniaturizing my first version and using a new form of remote control. I took a smaller remote control toy car and tore out the built-in control system, leaving only the motors and battery intact. This time, I purchased the smallest Arduino, motor controller, and bluetooth shield in attempt to keep the small size. I also used a second Arduino with a tilt sensor and bluetooth module attached, which would act as the controller for the car. The tilt sensor picks up the change in tilt of a person’s hand and steers the car accordingly.

This is what the car looks like with the cover on.

The Arduino here has a built-in bluetooth shield which allows for a smaller design. There is also a lithium-ion battery pack and a very small tilt sensor. The small size of the components mean it can be fit inside the black box shown in the background of the picture. 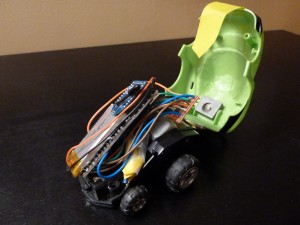 When the cover of the car is removed, you can see the intricate packing of the Arduino, bluetooth module, motor shield, and battery pack.

When the microprocessor is lifted up, you can see the tight bundle of wires that go into the car.